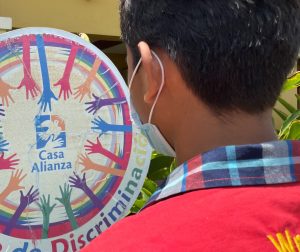 Title: A Message of Pride from Casa Alianza Nicaragua

Brief Description: Casa Alianza is helping Dex discover his true self—and helping his grandmother in Ciudad Belén understand his sexual orientation, gender identity, and how she can be a part of his journey.

Last January, when Dex* came to Casa Alianza Nicaragua, our Covenant House program in the Nicaraguan capital, Managua, his main concern was to advance his studies. What he found, though, was our relentless support not only for his studies but for his whole person, as he journeys to embrace his gender identity and sexual orientation.

Dex, 14, is from a community called Ciudad Belén, or “Bethlehem City,” which was created by the municipal government in 2014 with 1,700 homes. It was established exclusively to relocate citizens from other parts of Managua made unsafe due to climate change. But Ciudad Belén lacks adequate hygiene and safety conditions, and many of its residents, including Dex, face gender-based violence in their homes.

At Casa Alianza Nicaragua, we have a special care office for young people who identify as LGBTQ+. Nolvin Rugama heads the office and says that the most rewarding part of his job is “to be able to hear the stories of each individual LGBTQ+ youth and discover with them the potential they possess.” Nolvin says each LGBTQ+ youth carries a figurative “backpack” full of resources which, when properly accessed and managed, allows them to flourish.

Physical and verbal violence against people who identify as LGBTQ+ persists in Nicaragua, with most acts of aggression centered in the family and community. To mark Pride Month, we at Casa Alianza Nicaragua reaffirm our commitment to youth who identify as LGBTQ+ and have struggled for generations to overcome prejudice and be accepted for the beautiful young people they are.

Dex says that from the moment he set foot inside Casa Alianza Nicaragua, he liked “the vibes, the friendship, the support, love, and, above all, safety” he has felt here. He says Casa Alianza is helping him discover his true self — and helping his grandmother in Ciudad Belén understand Dex’s sexual orientation, gender identity, and how she can be a part of his journey.

Today, Dex is proud of who he is. He feels able to reject stereotypes and express his gender as he wishes.

*The young person’s name has been changed for their protection.

On June 19, our teenage girls who are part of the La Alianza soccer team…

La Alianza, Guatemala is very proactive in making life better for the girls it looks…

Volunteer with La Alianza, Guatemala – below are ways you can help – Spanish speakers only