13-year-old Sheryl has lived a life of unthinkable pain.

A survivor of sex trafficking, her childhood was a living nightmare.

But there is hope.

With the support provided by Compass Children’s Charity, she is now recovering and is safe.

In our 20th year can you donate £20 to help trafficked children like Sheryl?

We still desperately need your help.

Sheryl was born into a poor family in Guatemala. Her mother began borrowing money to feed the family. Then one day; the lender demanded all the money to be repaid.

“He told my mum that the only way to pay him back was with her daughters.”

Sheryl’s mother begged him not to hurt the girls, but he beat and threatened to kill her. He raped Sheryl and her 15-year-old sister, threatening to kill them if they told anyone.

“I shouted, screamed, begged him to stop. I remember that after, when I went to school, everything looked different. I wasn’t the same girl I was before”

The abuse led to Sheryl and her sister being forcibly taken to a warehouse where girls as young as four were sexually exploited at gunpoint. Drugged, tortured and starved, Sheryl was trafficked within the country and sexually exploited each night. The children who refused were murdered.

“I never thought I would see a ray of hope…”

One night the girls made the incredibly brave decision to scream together to attract attention. A neighbour heard them and called the police.Sheryl and her sister were taken to a Compass funded safe house, La Alianza, in Guatemala, where she is recuperating.

At first she was scared, full of hate and fear. Today she has made incredible progress.

“La Alianza is like being in a world full of hope where I’m no longer alone. I’ve learned to admire myself for having survived what I have lived through.”

With support from specialised psychologists and group therapy, Sheryl is learning to understand and cope with what happened. She has grown in strength and took the brave decision to bring charges against the men who exploited her. Dedicated solicitors at La Alianza supported her every step of the way.

As a result of her ordeal, she is now a mother herself; having received dedicated care and support to help her on the journey of motherhood. She is fiercely protective of her daughter, determined that her fate will be different.

Sheryl is now going to school and wants to train to be a psychologist or lawyer so that she can help other people and defend their rights.

We want more children like Sheryl to overcome the abuse they suffered; to keep them safe, find them justice and give them a second chance.No child should be abused.Would you help us to ensure their safety ?

Please donate today so we can fight child abuse together.

£20 will help provide a place of safety.

£60  will pay for medical and maternity care.

£100 will provide food, clothing, education and shelter for two months.

£260 will pay for a solicitor for one month to help bring child abusers to justice and prevent future abuse. 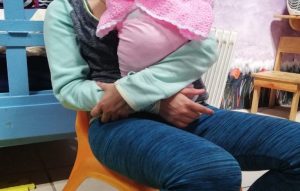 As part of the work carried out by the Educational Program, the  girls made murals…

Read a full version of our Easter appeal for Carolina here...Compass-Easter-2018 Final

When I used to live on the streets – can you help make a difference today ?

“When I used to live on the streets, I felt very sad. I couldn’t go…